NVIZ are thrilled to provide all the VFX for Season 3 of Hanna.

Fans of the highly successful Hanna series have been waiting eagerly for the release of season 3. Thanks to the pandemic, they’ve had a longer wait than expected, but at NVIZ, we think they’ll find it was worth it! NVIZ were delighted to be working closely with Executive Producer, Tom Coan on the series, which, written by David Farr and starring Esme Creed-Miles, is a fast moving show, and that also applied to the work that NVIZ provided, turning around 500+ shots in 10 weeks.

Led by VFX Supervisor, Jason Evans, much of the VFX sequences were shot in Prague. With Evans on set for much of the time, back in the UK the NVIZ team, led by CG Supervisor Sam Churchill and 2D Supervisor Agueda del Castillo, organised their work around brief gaps in shooting when he could meet with them online. 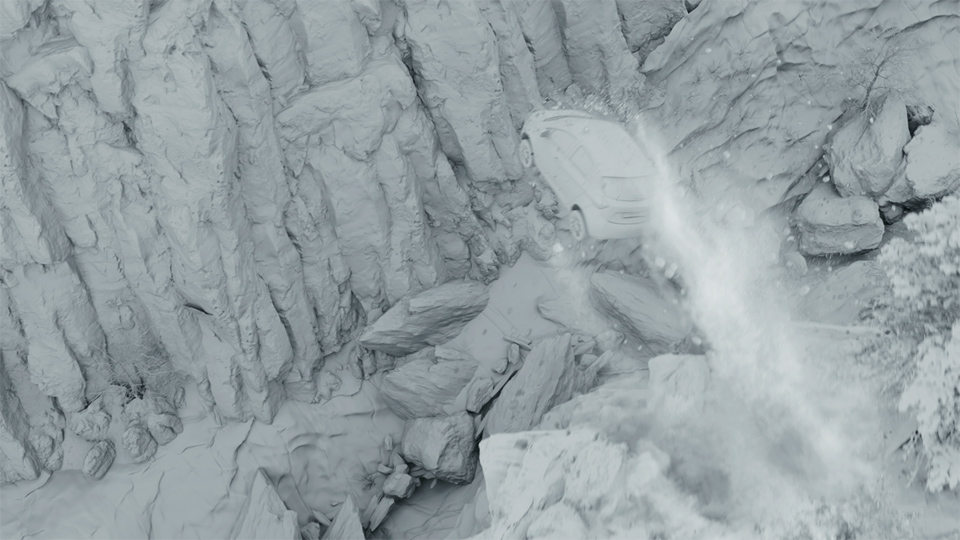 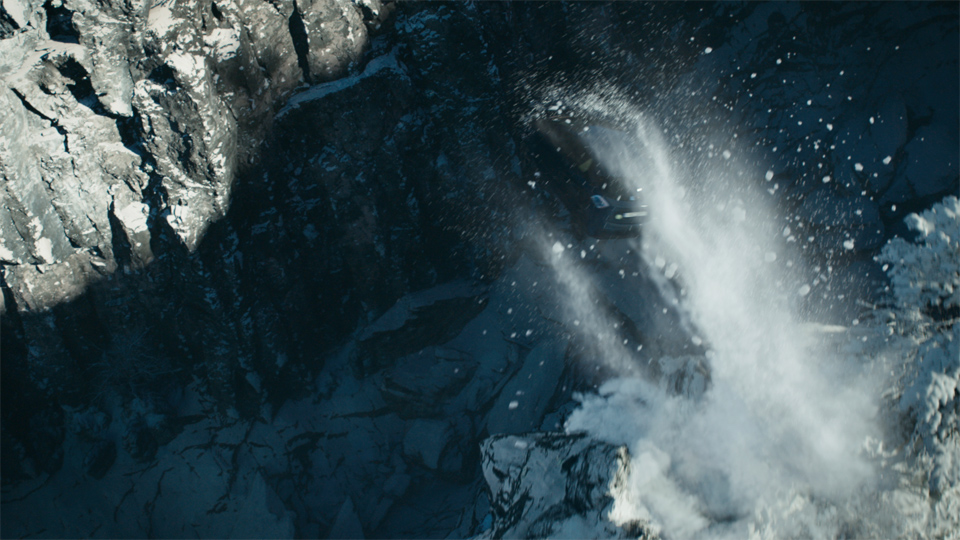 One of the most memorable sequences is an assassination attempt that is set in a ravine where Hanna’s electric car is hacked remotely, disabling it and sending it flying dramatically over a cliff.  The scene was shot in a stunning, remote, snow laden location in fluctuating weather.  “On the first day we had glorious weather” recalls Evans, “But when we went back the next day the location was wrapped in mist and covered in cloud.”

In order to make the sequence work (and look as stunning as it did on the first day of shooting) a series of CG builds and matte paintings were required, resulting in an entirely CG shot.  This included a full 3D build of the whole cliff ravine, snowy mountain setting, trees and the car, which also needed to be kicking up snow and debris as it went over the edge of the mountain.  Wide matte paintings and changing the lighting direction in many of the plates completed the environment, while muzzle flashes and other FX were added into the final versions. “This was the one shot that would have screamed out “Bad CG!” if it wasn’t done meticulously.” says CG Supervisor, Sam Churchill, “So it was really important to make sure it was perfect, within a very tight schedule.”

A favourite sequence for Churchill was a gorge shot where Hanna is involved in a cliff edge fight. The shot was filmed on two plates, one for the action and one for the cliff edge.  However, a dry river bed on location prompted the idea that the fight could also take place over running water - the team provided a dynamic water simulation that provided an extra sense of danger. 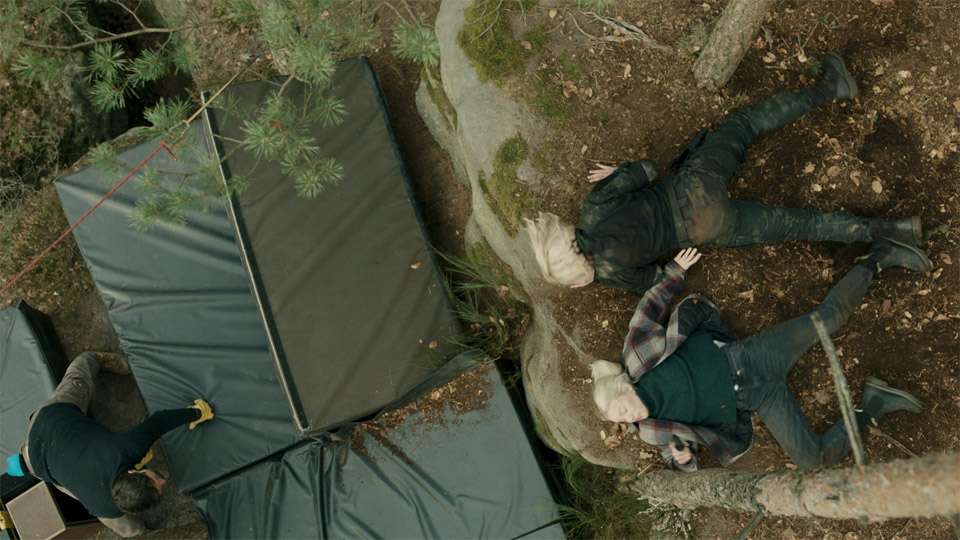 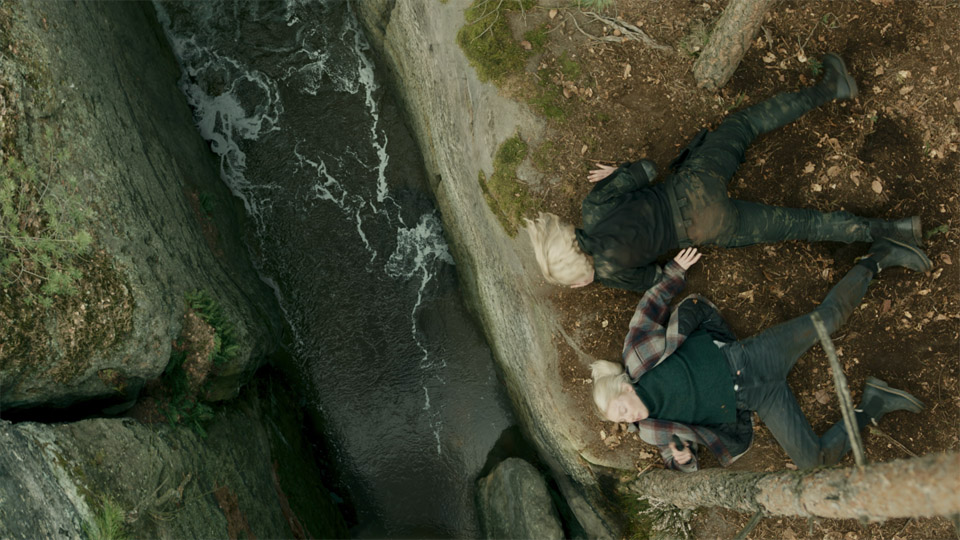 In addition to the environment work, More heavy duty CG work included further ravine shots with a CG cable car, helicopters, signposting and other street furniture to dress Prague for Paris and Vienna, and a multitude of VFX including blood, reflections, fixes and graphics for the pivotal ‘Kill List’ sequence.

NVIZ also played an important role in developing and creating key graphic effects for Hanna 3.  The team were contacted in February by the producers to brainstorm and help develop the central idea driving the series - the sinister Kill List algorithm.

The unit was already shooting in Prague when our team took the call with Executive producer Tom Coan, Production Designer Denis Schnegg and Director Weronika Tofilska to discuss possible solutions for the Kill List, both on-set and for post-production. The NVIZ graphics team, led by Creative Director Chris Lunney, began work on R&D for the visual style of the algorithm immediately, and quickly established different ways to portray the look and feel for the crunching of an almost infinite amount of data, at both micro and macro scales.

Through researching machine learning, our team came up with ideas for the ‘cloud’ of data and how it was filtered and processed by the AI. We created multiple looping screens of data, along with the control screens and Max Kaplan’s tablet. These were run live on the day and provided an evolving texture to the set.

Once in post production, it was established that we needed to ‘dive in’ to the algorithmic cloud, to both show how the filtering process works and to pick out a target, revealing them to the viewer. The reasoning behind this was to connect both Hanna and the viewer emotionally to what was happening in the sequence.  A casting call went out via content producer Ntando Brown and the candidate (Elsie Cullen) was selected to feature as our target “Eliza”. 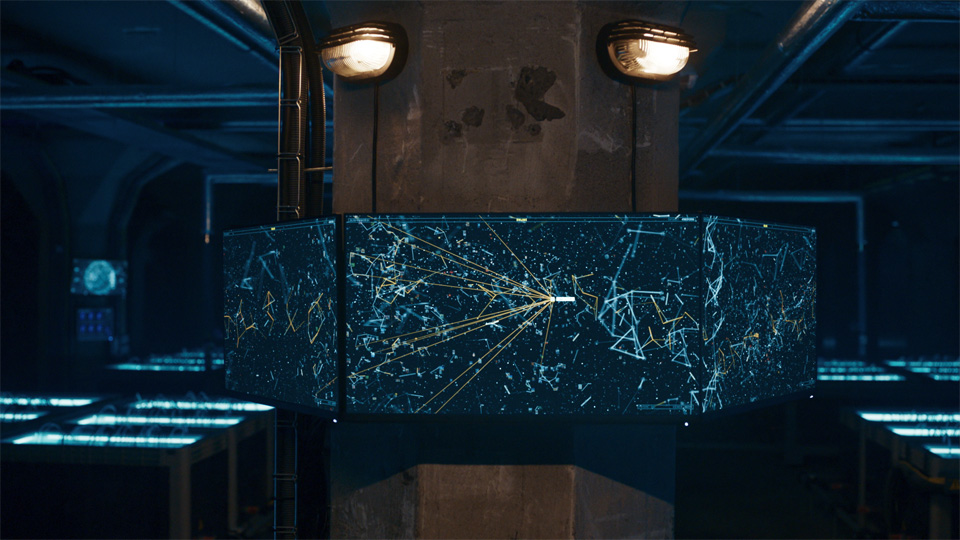 The first task was to somehow source 1000’s of photos and videos of our featured character. Fortunately, given the compressed timescale Elsie Cullen was willing to trust us with the real-life content of her camera roll, IG and other social accounts, made up of candid shots and home videos.  These were used as a ‘bed’ to then lay the hero content on. This hero content was shot specifically for the show and was used to illustrate the development of our fictional character, Eliza, as both a character in the story and a possible target. In just a few seconds, we track her development from a wide eyed and hopeful youth to an increasingly politicised and disillusioned individual, at odds with the world.  The algorithm grabs hold of this change in Eliza and doesn't let go, identifying her as a target. 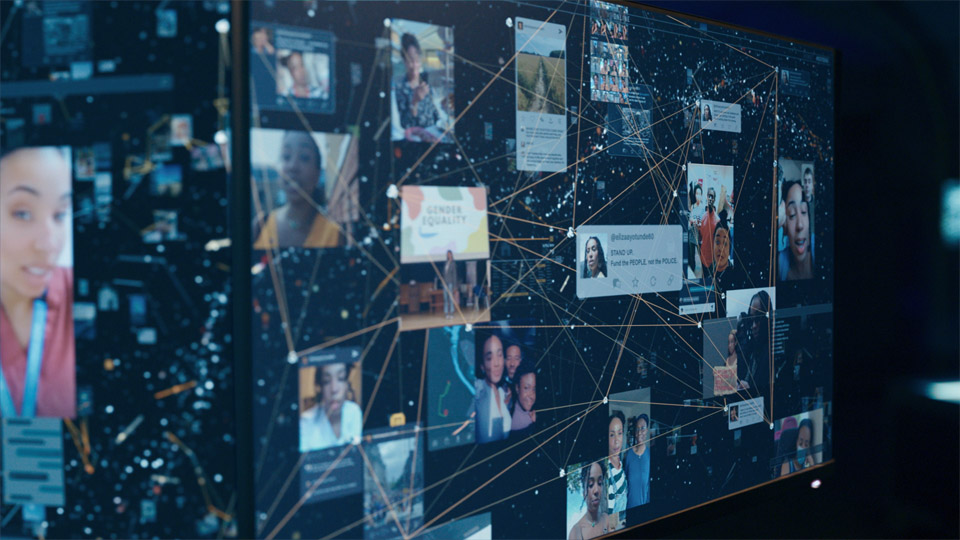 This third season could be the best Hanna adventure yet, and NVIZ were honoured to be part of the whirlwind ride. “The tightly constrained schedule made this quite a feat for our team” says Evans, “and we’re incredibly proud of the way they pulled together to create great work at speed".