40 million Fortnite players competed to qualify for the finals held in New York. Only 100 finalists, with an average age of 16, made it to the 3-day event which took place in the Arthur Ashe Stadium. In addition to the finalists, the stadium welcomed over 19,000 fans who came to watch the gaming, while the viewing audience on YouTube and Twitch peaked at an unprecedented 2.3 million during the Solo Finals.

NVIZ are proud to have contributed to the record-breaking event and the visual spectacle that ensued. 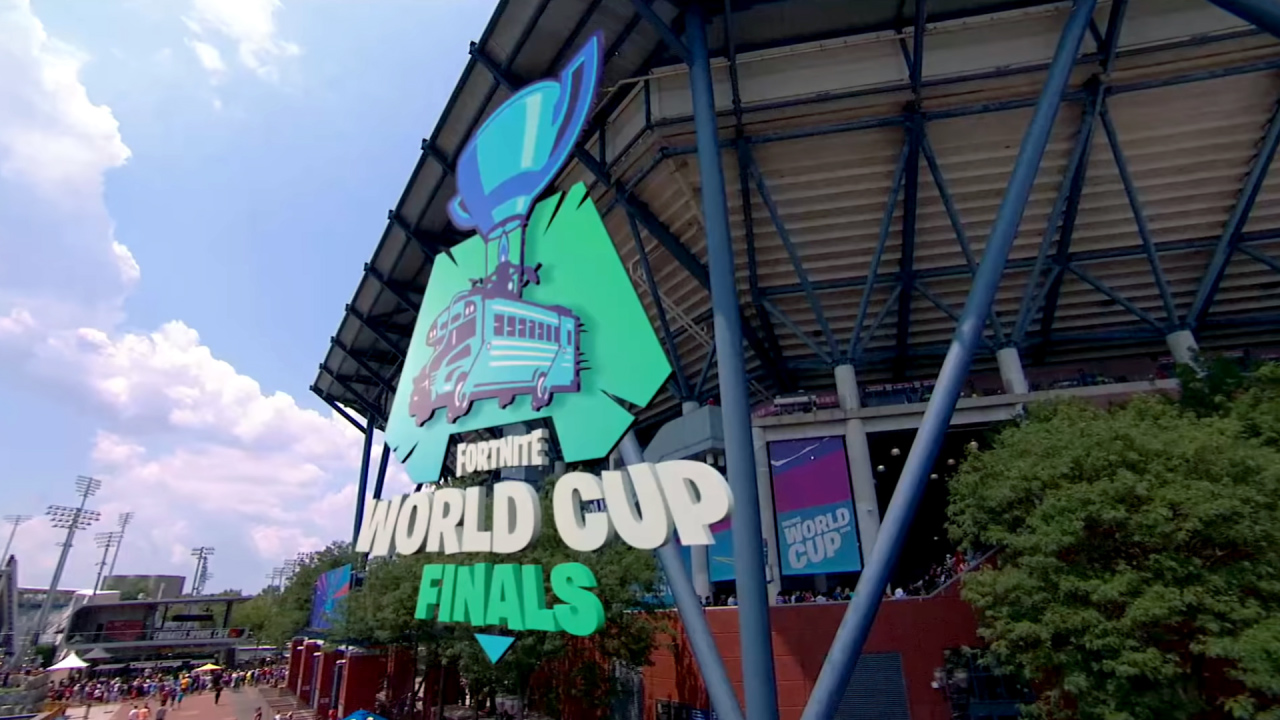 The team at NVIZ worked with Michael Gay and Misia Clive from Epic to design and build Augmented Reality (AR) graphics for use throughout the show. These 3D AR graphics appeared in-camera as part of the live broadcast, occupying the same space as the audience, presenters and players.

To realise this, NVIZ developed a new system that integrated these assets with Ncam to display and construct the scenes. The NVIZ team, led by Eolan Power and Georg Engebakken, seamlessly operated within the NGE Broadcast Team during the event, collaborating with the Director Joe Hood and Head Creative Producer of N.G.E, Xander Denke, to design and construct hundreds of shots throughout each of the shows.

“In my eyes Eolan and his team performed the impossible, against the harshest of deadlines. Creating a multitude of new assets daily and manifesting shot compositions in seconds. Every time I looked at the multi-view there was a new scene for everyone to gawk over. The efficiency and creativity exerted by the AR team made them the true MVPs of this broadcast.”

Once on location, integrating Fortnite’s bright and larger than life aesthetic into the real world presented an interesting challenge to the team, as Power explains: "A central focus of our approach was for each element to be built and lit as if it was actually part of the environment. Adding dramatic real-world lighting to familiar Fortnite assets like the Battlebus meant that audiences were seeing familiar things from the game in ways they hadn’t before; this served as a bridge in and out of the game’s universe."

But the biggest challenges were presented by the pace and unpredictable nature of broadcast. Much of the lighting design needed to be attended to 'on the fly' in reaction to what would be seen in camera. The NVIZ team relied on a combination of Ncam’s comped screenspace reflections and Unreal Engine’s dynamic lighting features to quickly integrate the assets into the space by eye. Although the aim was to make the assets feel real, they still had to have an enough impact and contrast to make the frame visually arresting, so there was an interesting and tricky balance to find. 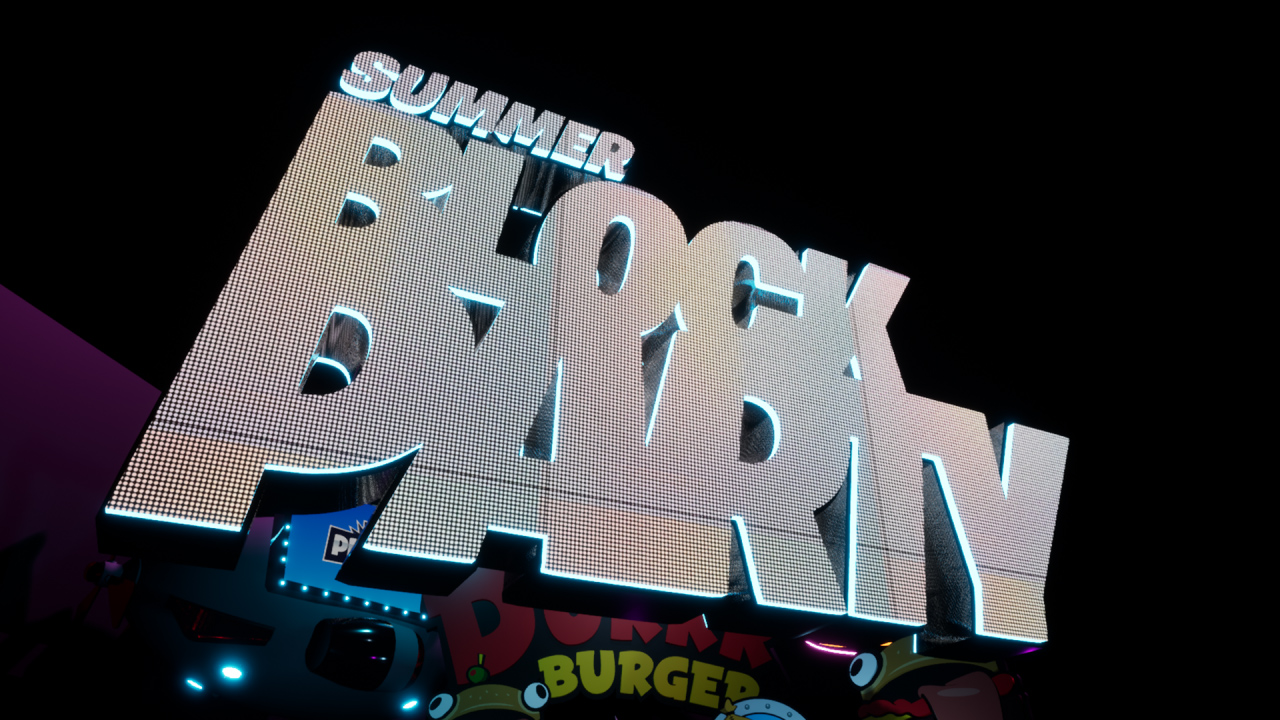 Not surprisingly with an esport event of this scale, keeping up with the coverage presented a huge logistical challenge to the NVIZ team. Across the 6 days of the Fortnite World Cup Tournament and the Summer Block Party, NVIZ contributed to a staggering 22 hours of broadcast: "From the outset it was imperative that our AR/Ncam equipped cameras could be treated like any other camera unit, ensuring that they could be called upon instantly by the main broadcast, while also being directed by us to capture the AR scenes when they weren’t in use." says Power.

Power acted as AR Director during the broadcast, directing the cameras and planning shots when the cameras were available. These shots were then pitched on the fly to the broadcast team, who would either broadcast them immediately or record them for later use. By using Ncam integrated with Unreal Engine’s flexible blueprinting (visual scripting language), the team created the perfect solution for a live environment. This made the setup of both tracking and AR composition as invisible as possible, but also fast enough to not hold up the show. 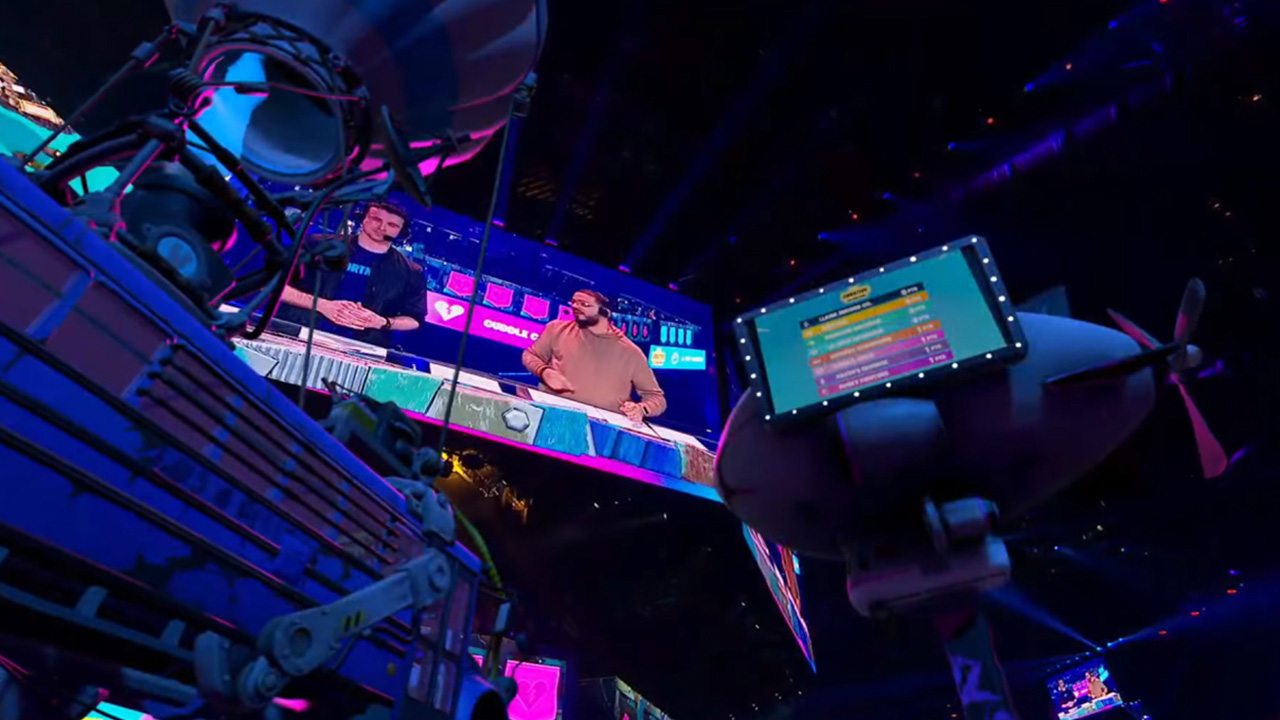 To provide the team with as much control as they needed to create the shots, NVIZ developed a bespoke interface. This software sat over the Ncam tracking system, allowing them to spawn the objects in numerous ways. In addition, this afforded the ability to adjust the light direction and intensity and also to manipulate the assets; moving them around in any way required (pivot, rotate etc) just like driving characters in a video game. This software offered numerous controls and became central to the team’s role during broadcast, as NVIZ Unreal Technical Director Georg Engebakken explains: “It was quite a complex system that allowed us to cycle through the ever expanding list of assets and to place them in Ncam. As each day of rehearsal passed, we’d add features constantly to meet the broadcast’s needs. This offered an unprecedented level of flexibility - allowing the team to augment the regular coverage spontaneously throughout the show, and opening up numerous possibilities for the broadcast team.”

Iterating on this system’s features during the rehearsals meant the approach adapted and grew with the production and in the end the NVIZ team proved to be a seamless part of the broadcast machine, providing hundreds of AR focused shots, created on the fly, throughout this game changing event.

During the final day of broadcast, NVIZ worked with the DJ Marshmello and his team on a 7 minute half-time show.

After Marshmello’s creative team saw the AR in action, they were excited by its potential for the concert and thus worked closely with NVIZ to prepare for the DJ set. This required a more structured approach which consisted of setting up cues that corresponded to specific arrangements of AR. These sequences could then be cycled through and lined up to the cut or beat of the music. This not only demanded a further development of their software solution, but also in how the team worked practically on set. It was a high intensity performance with camera cuts and AR changes every second.

"After an intense week of rehearsals and more key iterations on our system, we pushed the flexibility of our workflow further than ever before, even though the working order was in some ways more like traditional pre-baked or pre-planned AR " says Power.

"We wanted to bring Fortnite characters to life and make them part of our Fortnite World Cup coverage. We had a unique stage and venue layout that left little room for error. NVIZ did an excellent job of reacting to the ever changing challenges during a live on-site production. From an 80-foot tall Marshmello to Fortnite characters standing right next to players, the addition of AR absolutely elevated the quality of the broadcasts."

It was a perfect way to cap off a fantastic collaboration between Epic, NGE, Ncam and NVIZ, and we were thrilled to be involved in such a big step for the esports world.