Nviz were delighted to provide, Previs, VFX, Postvis and Graphics for Avenue 5, HBO’s space tourism comedy from creative genius Armando Iannucci (The Thick of It, Veep).

The show's overall VFX Supervisor, Simon Frame, returned to Nviz for Avenue 5, having previously worked with the team on sequences from the first series of Britannia, for which Frame received a BAFTA nomination. The Nviz team was led internally by VFX Supervisor James Fleming and CG Supervisor, Sam Churchill, while the graphics were supervised by Creative Director, Chris Lunney.

Nviz’s work on Avenue 5 began by creating previs for the gravity flip sequence. This was essential, not only to inform the director of the final look of the sequence, but also to aid planning for live action shooting. Previs was required to cover the 3 areas affected by the gravity shift; the atrium, which is the main area in the ship, the toy room and the spa.

The previs was unusual in the fact that the team used crowd simulation for the many human characters in the various areas. Previs artist Eduardo Schmidek worked in Maya, using Miarmy for the crowd work, and worked on several iterations to find the right balance between accuracy in the gravity shift dynamics and the comedic timing. Once the general timing was established, the team were then able to work in specific touches on hero shots.

Much of the action in Avenue 5 takes place in the Atrium and building this to show the scale and size of the ship was a huge challenge from a CG point of view. On set the production had built the ground and first floor. The Nviz team then came in to augment the environment in CG up to 6 stories high, and also worked to establish a key plot point of Season 1 - the gravity flip. 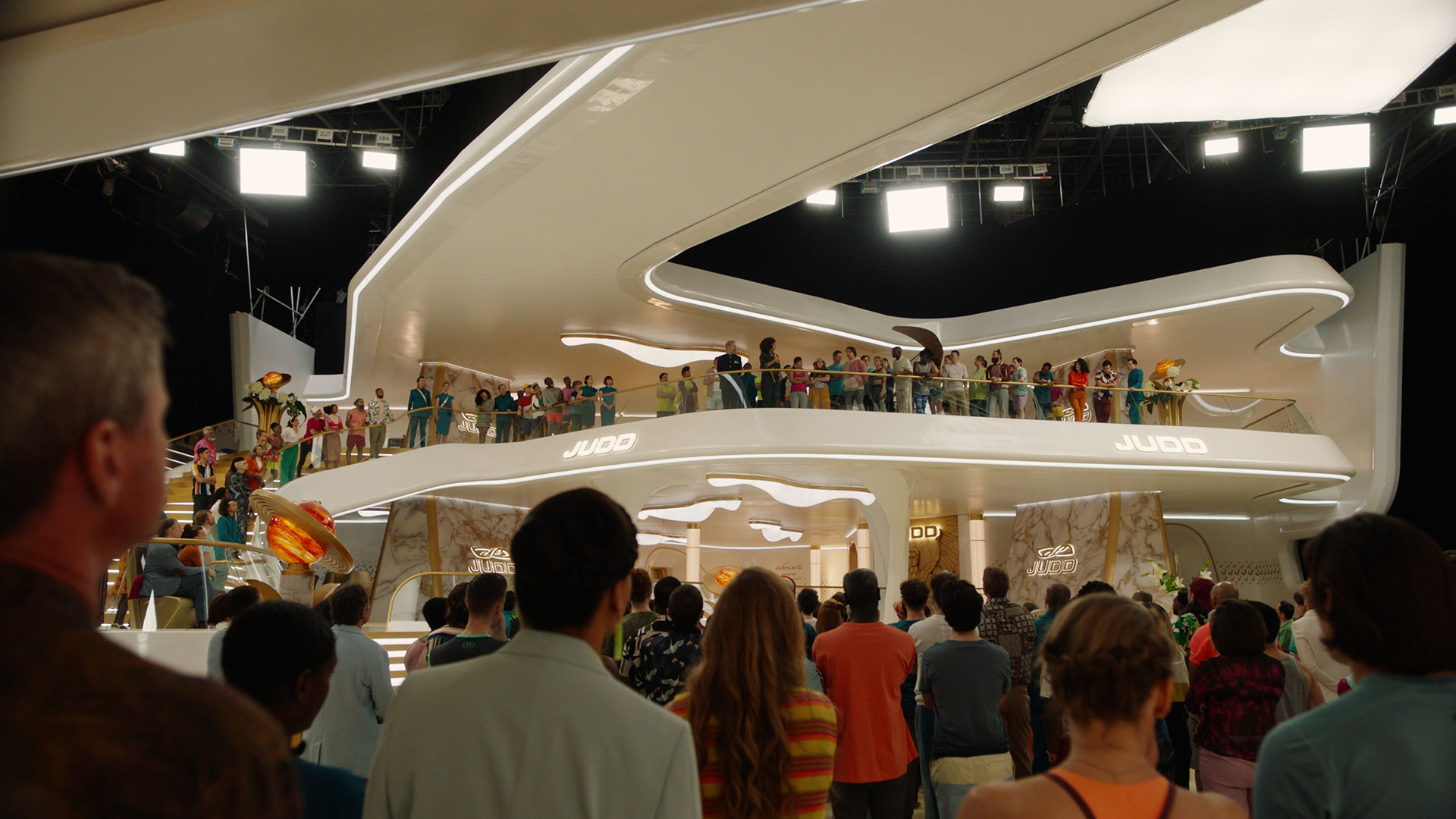 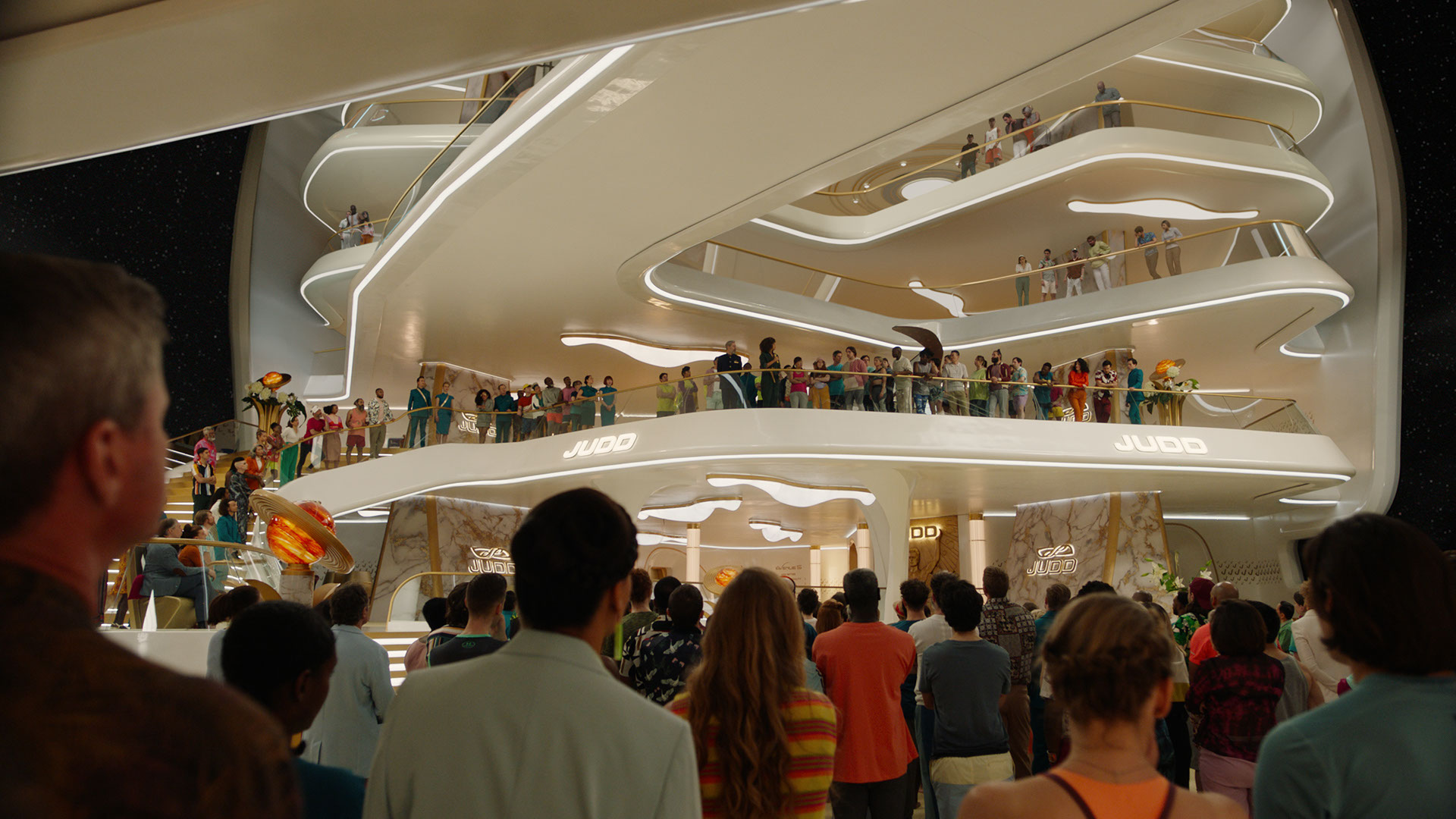 The gravity flip sequence is a major hero sequence that provides the basis for the series plotlines, as the passengers and crew realise that they are stranded in space. A major engineering fault suddenly causes gravity loss, resulting in the ship lurching in space from side to side. The timing adds to the comedy, as it takes place during a huge, record breaking yoga session on the ship’s atrium.

This sequence comprised of shots that integrated hundreds of elements. The work was a combination of a heavy 2D approach using elements that had been shot on set by Frame, including stunt performers being pulled from side to side; and then augmented with a barrage of CG elements, including digi doubles, yoga balls, yoga mats, massage stones, toys, cutlery, and even a flying piano!  “We supplemented the scene with as much CG as we could get away with, the brief was to try to fully sell the sense of chaos and destruction.” says Churchill. Added Fleming, “Every live action person in that scene had to be rotoscoped, cut out and put carefully into every frame, then Digi doubles inserted for the action the stunt doubles couldn’t achieve. It was quite an undertaking.” 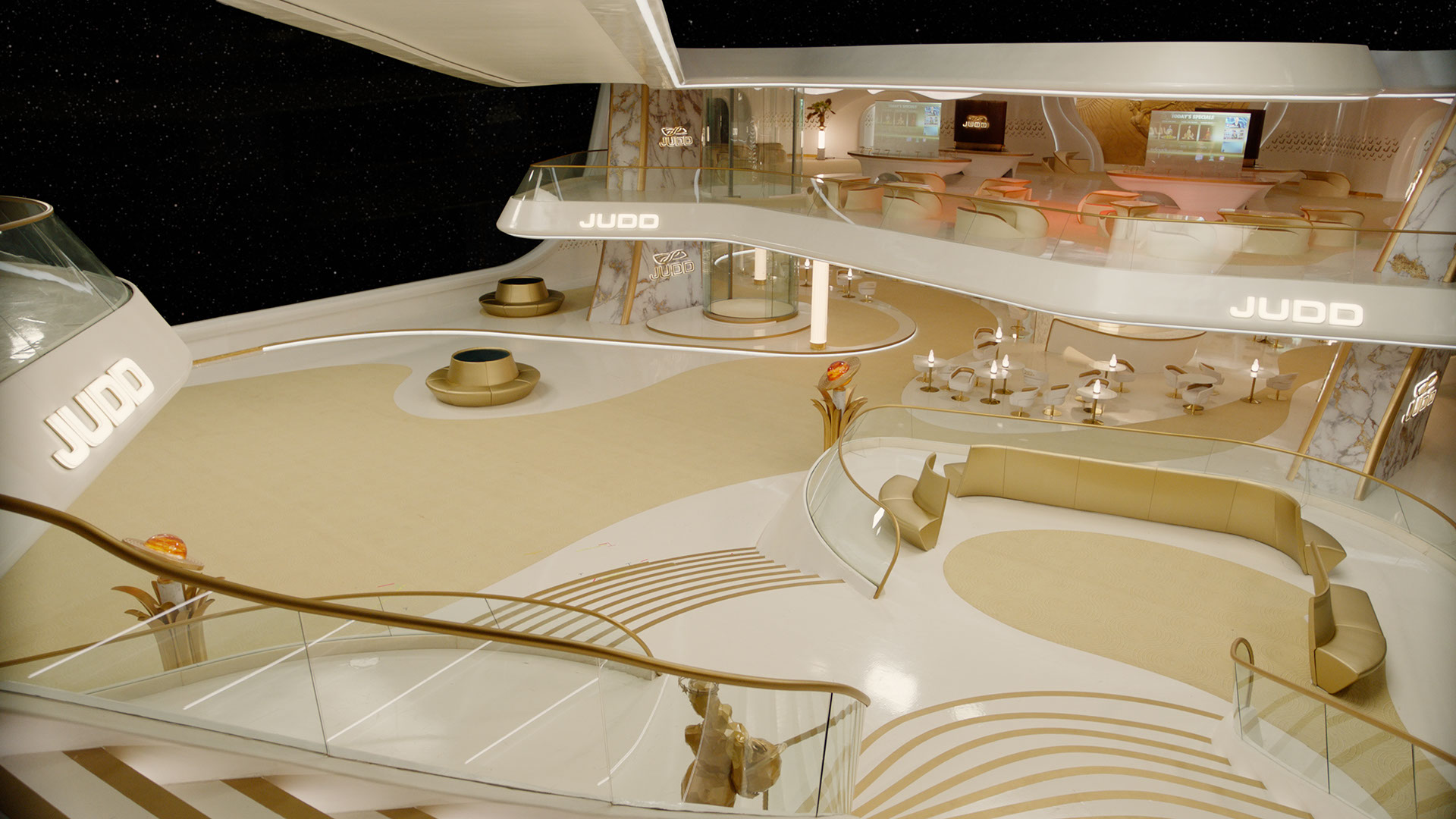 Later in the series, mayhem ensues after the passengers discover that the crew are actors and jump to the conclusion that they are not actually in space at all, but in a reality TV show. Determined to prove this they attempt to leave via the Airlock to disastrous results.  Nviz were required to create the effect of the unfortunate passengers being instantly frozen once the airlock is breached. To realise this, multiple witness cameras were rigged on set and the actors “froze” into their final positions on set. Nviz’s VFX Supervisor, James Fleming was present on set to oversee the process and this reference was then passed to a photogrammetry team, who scanned the performers.

Another major part of the work provided by Nviz was for the multifarious graphics required on board the ship. In all, Nviz worked on 400 graphics shots, with 144 different setups. The graphics team, led by Chris Lunney worked closely with both Simon Frame and the project’s Production Designer, Simon Bowles, to create new designs for the many screens, devices and advertisements around the ship, heads up displays for the bridge and spacesuits, to tablets, phones and engine room and communication screens on board ship and earth. These graphics were either developed from the on-set graphics, captured in-camera, or created from scratch.

Working on the Avenue 5 series was a huge rollercoaster for the Nviz team, creating some of the most hilarious effects the crew had had the pleasure of producing.